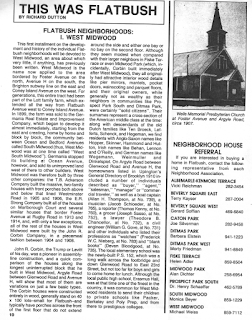 Richard Dutton and West South Midwood Richard Dutton Article Back in the Fall of 1988, having just recently fled the rapidly upscaling Park Slope, we were welcomed to the neighborhood by Melanie Oeser who left us a goodie bag with an old copy of the Flatbush Development Corporation newsletter.  On page 10 was a list of phone numbers for representatives from each neighborhood association (the West Midwood contact was Mike Weiss and his phone is the same number at which I contacted him a couple of weeks ago, proving that some things DO remain the same in these parts).  Above the list was an old photo of the church across the street from our house.  And next to the photo was an interesting article written about the early history of West Midwood which I don't recall reading at the time, but I must have liked it because I tore that page out and stuck it in a book about the 1986 Mets...from whence it surprisingly tumbled out two weeks ago as I looked up some stats during the Cubs
Post a Comment
Read more 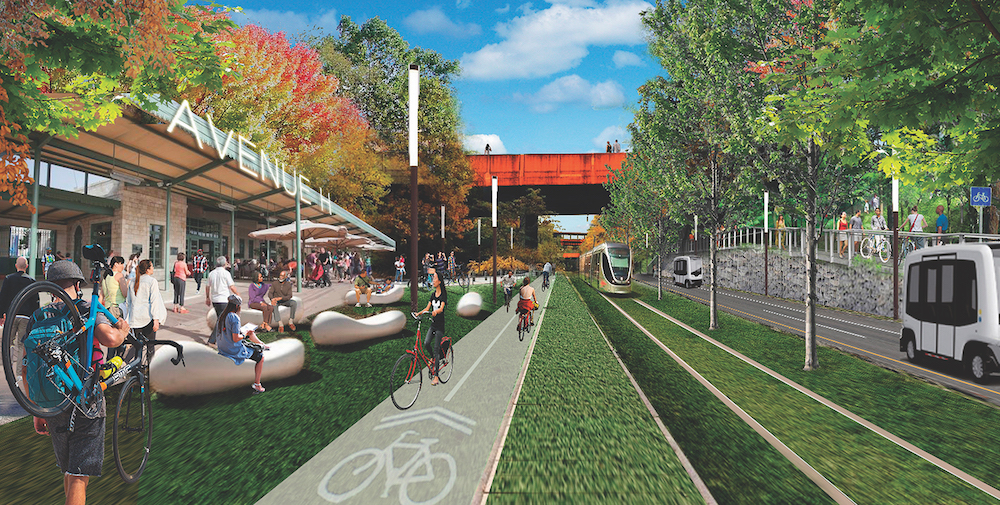 In May of 2008 I posted a map of the proposed Cross-Harbor Tunnel Project, which is presently undergoing feasibility reviews, and a map of what the MTA suggested could be a very long-term capital project to build a circumferential subway line following the same route.   The Circumferential Line Suggested by the MTA in 2008 The Cross Harbor Freight Tunnel Suggested in 2005 What both proposals had in common was the track bed forming the southern border of our neighborhood presently used by the LIRR to run an average of one freight train a day from Queens to the Bay Ridge Army Terminal at the foot of 65th Street. The MTA has not uttered another word about its 2008 idea and the Cross Harbor Tunnel is another 10 years away, were it to ever be approved.  Readers in 2008 will no doubt remember, if they have perfect recall, that I was very much enamored with the idea of a new subway line that would link with the airports and all other subway lines, allowing five million folk
Post a Comment
Read more

Early Chronicles of West South Midwood In Photos: Then vs. Now (Part 10) 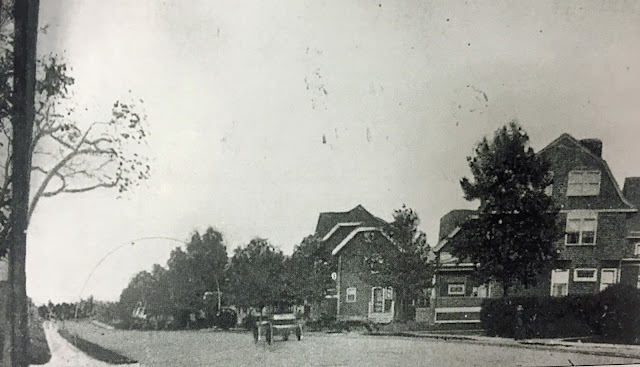 A continuing series continues with this continuation that might be the end...or the end of the beginning...As you will recall in our last thrill-packed image installment which you can find HERE , we displayed photographs that mostly contrasted 1910 locations with today (West South Midwood was built rather quickly, with most of the construction occurring 1904-1905 and you can read about those early days HERE and HERE and HERE ). The images below contrast the same street scenes at many different intervals since 1910.  THIS POST IS UNDER CONSTRUCTION 1910: Foster Avenue From NE Corner of Coney Island Ave, Looking Southeast Towards Westminster Road The corner house above (closest to the wagon) is the rear of 656 Westminster Road (aka 1128 Foster Ave): 2016:  Beige House in Center Survives; Rear Entrance Now Attached Garage 1961: Foster Between Rugby and Marlborough 2016: Foster Between Rugby and Marlborough 1961: Northwest
Post a Comment
Read more
More posts